By The Ceramic Tile Education Foundation 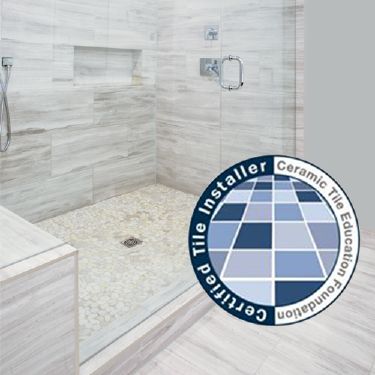 If you've ever met our own, John Trent, you know he's a pretty special guy. Kind, good, and on a mission to fight subpar tile installations. Here's his story by The Ceramic Tile Education Foundation about becoming Certified Tile Installer number 277, what it means to him, and why he feels every installer in the industry needs to do this.

Horrified about subpar tile installation? Become a Certified Tile Installer. That's according to John Trent CTI #277, a former tile installer, and now a Territory Manager for Schluter Systems since 2012.

John Trent's motivation results from his own experience getting into the tile installation business, which he considered rocky at the beginning. As he explains about starting John Trent Tile & Stone,

I first got into the industry on my own, through trial and error. I was exactly the type of guy we see entering the trade today – with no experience, no apprenticeship, nothing but the eagerness to create.

He considers himself fortunate to have discovered the National Tile Contractor's Association (NTCA) and the many educational and training opportunities it offers. As a result, John says that,

I became a sponge, soaking up everything I could... John Cox and James Woelfel became friends, as well as mentors... Knowing that the two men I'd come to admire as mentors and friends supported certification, it became a must-have achievement for me.

With their encouragement, John looked for a CTI test in his region of Northeastern Florida, but unfortunately, no tests were available.

Not to be outdone, John contacted the Ceramic Tile Education Foundation (CTEF) office in South Carolina seeking help. After a brief conversation with Director Scott Carothers, John asked if he could take the CTI test at the CTEF facility during the Christmas season. The answer was “yes” and test was set up between Christmas and New Years Eve for John.

The really interesting part of this story is that John was the only installer participating, making his test the smallest on record at that time. John completed both tests successfully and became CTI #277 in December of 2009.

Encouraging His Competition to Become Certified

As the owner/operator of his own business, John realized firsthand how important it was to become a CTI. In fact, he considered it so important and the benefits so valuable that he helped his competition get certified. His justification? He states that doing so,

...helped us all justify keeping our price on par with each other. No one likes to lose business, but it makes it easier to lose it to someone who you are comfortable with, knowing the customer chose someone with the proven credentials to provide a lasting tile job.

Trent points out that ultimately the tile industry is harmed by sub-par tile installations.

If an end-user receives a job that may be beautiful the day it is installed, but only becomes a maintenance headache or fails prematurely, they are less likely to use tile again.

Subpar installation and tile failures are in part a reason for an increased number of tile alternatives that are considered to be less of a maintenance headache or are less likely to fail.

In 2012, John Trent became a Territory Manager for Schluter Systems and even more committed to certification in the tile industry.

As a territory manager, a lot of my time is spent training installers. In these workshops, we train on average 40 attendees, on both Schluter products and industry standards. While I have encountered many 'cream of the crop' installers within the industry, I also see men and women who are just entering the trade and have little to no exposure outside what they have picked up through trial and error, watching others, DIY shows, or spending an hour at a big box store. Almost always, these paths have promoted installation methods that do not reflect what is accepted by the industry.

The antidote is certification which he promotes endlessly:

I discuss certification at the beginning of every class I host, as well as with everyone I come in contact with, whether they are in the industry – installers, designers, sales, code enforcement, architects – or simply project owners.

Certification is an important step to showing customers your value as a tile installer. Being a CTI sets you apart from your competition and shows a willingness to go above and beyond. Especially now with over 1500 CTIs.

At the time of my certification, I was CTI #277; meaning, there were only 277 of us nationwide. This made it difficult for it to mean something to the broader audience. That has changed, and we are now seeing projects that either recommend or require certified [tile] installers... Ultimately, through certification, the industry is providing end-users a better product and increasing consumption of tile.

John's commitment to certification has only grown stronger as he meets new installers and experiences their enthusiasm for the tile industry. What comes through when you speak with him is a deep belief in helping everyone around him improve. He says,

I believe we all owe it to ourselves and our industry to improve conditions within our control when we are able to do so. “Certification is one of the paths we can travel to fulfill this obligation.

This article was originally published on the Ceramic Tile Education Foundation Blog: https://www.ceramictilefoundation.org/blog/fight-sub-par-tile-installation-with-certification-says-john-trent-cti-277.